NEW TAX REFORM LEGISLATION: WHAT YOU SHOULD KNOW

The new tax bill highlights.  Congress has passed the largest piece of tax reform legislation since 1986. However, this bill will not affect the taxes for 2017 (the one you file in 2018). In case you’re wondering how you’re affected, here is a short explanation of the main topics on the bill.

TAX RELIEF FOR INDIVIDUALS AND FAMILIES 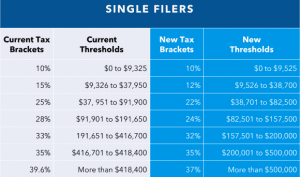 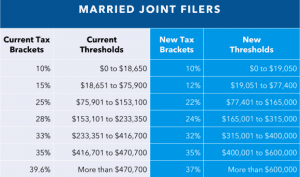 These increases mean that fewer people will have to itemize. Currently, about 30% of taxpayers itemize all their deductions. Under the new law, this percentage is expected to decrease.

The bill also adds a new, non-refundable credit of $500 for dependents other than children, such as children over age 17, elderly parents or adult children with a disability. Finally, the new tax bill raises the income threshold at which these benefits phase out from $110,000 for a married couple to $400,000.

Electric Car Tax: Drivers of plug-in electric vehicles can still claim a credit of up to $7,500. Just as before, the full amount is good only on the first 200,000 electric cars sold by each automaker. GM, Nissan and Tesla are expected to reach that number next year.

ELIMINATIONS OR REDUCTIONS IN DEDUCTIONS

The bill also caps the amount of mortgage indebtedness on new home purchases on which interest can be deducted. Anyone buying a new home will only be able to deduct the first $750,000 of their mortgage debt. That's down from $1 million in the current law.

Alimony: Alimony payments, codified in divorce agreements and go to the ex-spouse who earns less money, are no longer deductible for the person who writes the checks. This will apply to couples who sign divorce after Dec 31, 2018.

The new tax bill also offers a lot of new changes for business. Some of the most impacting ones are: